I can remember standing in our kitchen as a little kid and pitching a fit over some major injustice, like the fact that my brother had more whipped cream on his dish of pudding than I did. I would stomp my feet and scream, “That is NOT fair.”

Over the years, that scene would replay many times under many circumstances. When I was a teenager, my shriek morphed into, “Oh my God, that is, like, TOTALLY not fair,” and I would run to my bedroom and slam the door.

When that happened, one of two things would follow. If I heard quick and deliberate staccato steps—boom, boom, boom, boom, boom—that meant I crossed the line, my Mom was headed my way, and I was really in trouble.

If, however, the steps were long and lumbering—boom—boom—boom—that meant my Dad would soon knock and almost immediately, I’d start to cry. This kind-hearted man, who taught me the art of decision making via a pro/con list, always helped me see the error of my ways.

His opening line was one that all kids hate to hear and all young parents can’t believe they’ve actually said out loud, ”Nobody ever said life was going to be fair.”

My Dad didn’t end there. He always followed up by reminding me that disappointment and frustration can only become real tragedies if we fail to learn something from them. He would challenge me by saying, “What can you learn from this? How can you grow?”

Yesterday, I was invited to offer a eulogy for a man who worked with my husband’s company for many years. Although the two men battled different illnesses, their last days traveled a similar path with less than a month’s time passing between diagnosis and death.

There is nothing fair about men dying in their 40s and denied so much as the chance to say goodbye. So what can I learn from this? How can I grow?

I found myself turning to the words Elizabeth Edwards offered when facing her own mortality.

“The days of our lives, for all of us, are numbered…We know that. And yes, there are certainly times when we aren’t able to muster as much strength and patience as we would like. It’s called being human. But I have found that in the simple act of living with hope, and in the daily effort to have a positive impact in the world, the days I do have are made all the more meaningful and precious. “

Hope gives us strength, and trying to have a positive impact can bring us perspective. So to make my days meaningful and precious, I will choose to not be preoccupied by the perceived unfairness of the challenges I face, but rather gratefully acknowledge that I have more than my fair share of blessings.

And, quite frankly, more than my fair share of whipped cream and pudding too. 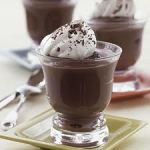