I walked in slowly, taking in my surroundings and checked in with the receptionist. My heart was racing and the fear on my face undeniable. The sweet woman behind the desk raised her eyebrows and attempted a reassuring half-smile; prompting me to faintly whisper, “I’m so scared.” “Don’t be. We’re going to help you,” she whispered back.

I took a seat in the waiting room. I avoided direct eye contact but looked at each of the other women waiting with me. My gosh, they were all so thin. No one spoke. One woman muffled a weak cough as she pulled her hair back into a thin ponytail.

When the door finally opened, I was invited into a much larger room. I turned and faced a mirror. My anxious reflection was blocked by something yellow…what could that be? It was vaguely reminiscent of an instrument of torture. Or maybe something written about in Fifty Shades of Grey.

“Welcome to the 8:30am Cycle TRX Class,” the chipper, chiseled chick in charge said to this fear-filled, fifty-year-old as I flopped my fat-ass on to the frame of a bike and stared at the Aureolin apparatus unquestionably aimed to inflict agony.

(Spoiler alert: The alliteration is a result of the fact that every muscle in my body is still quaking with tremors, including the creative cortex of my brain.)

“We’ll start on the bike for 20 minutes, and then we head to the floor for 25 minutes of suspension training where you will use your body weight to work multiple muscle groups and then we’ll head back to the bike.”

Excuse me? What was that? Did you just say, “Use MY body weight?” Why mine? What do you think I am, some sort of Olympian with superhuman strength? Do I look bionic? No. Is my name Jamie Sommers? Again, no.

I tried to mental telepathy my concern to the instructor. I used every brainwave to convey that I would be much more comfortable using the body weight of the waif seated next to me dressed head-to-toe in Lululemon than be forced to support my own squishy BMI swathed in a chic design from Champion for Target’s 2015 spring collection.

As she was already offering motivational instruction about resistance and pace of pedaling, I knew my mental telepathy was not working. I survived the bike and then took to the floor intent on not dying or making a fool of myself.

That goal was short-lived.

I followed instructions perfectly and took the straps in my hands and started to lean back. This was the first time I thought, “So this is how it ends.” Much like the feeling when I get on a ride at a fair (versus a full-fledged amusement park) I thought to myself, “Has anyone checked this for safety?” I leaned back holding the straps and my mind’s eye could envision my girth ripping the toggle out of the wall resulting in high-velocity metal shrapnel piercing my heart. Nope, that’s not right. Upon further review of the angle, it would head straight toward my eye. I prepared for impact.

After surviving that first set of exercises, I moved on to the second which involved standing on one leg while grasping a small rubber ball in the space behind your knee of the raised leg all while still leaning on those scary handles.

Funny thing is, the handles ceased being so scary when instead of picturing impalement, I was transported back to grade school when I first learned I lacked both balance and athletic prowess. I spent the next few minutes either swaying back and forth on one leg saying “Whooooaaaaa” or chasing my little rubber ball around the studio and apologizing as it smashed into other people. This is how it ends. Death by embarrassment.

As I wiped sweat from my brow, my thoughts went back to grade school basketball. I realize now my love of that sport stems from countless hours spent warming the bench…a uniformed spectator praying someone would foul out. Once, during practice in fifth grade, my coach called me out by name. I couldn’t believe he noticed me out of this talented group of girls on the floor. “Katie,” he said, “You jumped so high going for that last rebound that I could almost slide a piece of paper under your feet.” It wasn’t until years later that the high of him noticing me wore off, and I realized it was really a rip.

The last set of exercises involved putting your ankles into the straps and getting into plank position on the floor. I’m sure all the people I bashed into with my ball moments earlier were shocked to hear the instructor compliment my perfect plank form. They don’t need to know that I have a titanium rod fused to the bottom third of my spine which makes “flat back” pretty much the only option until my arm muscles begin to burn and shake, which occurs about seven seconds in and I start to see spots.

I don’t remember returning to the bike. Or driving home. It’s now six hours later, and I’m lying on my couch. I struggle to lift a glass of water to my lips and am seriously considering leaning over and lapping it up like a dog.

From my perch on the couch, some sadistic side of me is realizing how much I secretly enjoyed the challenge my morning presented, and I might actually try it again.

As I contemplate attempting to stand sometime today, my memory returns to many years ago when I worked for Hospice of Michigan. At one of our black tie events, I walked up to my husband holding court with a beloved local news broadcaster who was talking about how his travel plans always center around one of his or his wife’s hobbies like air shows or golf.   My husband said, “I’m lucky my wife’s hobby can be accomplished pretty much anywhere.” “Oh, and what’s that?” Mort Crim asked in his legendary timbre. Pat put his arm around me and said, “She likes to sit on the couch and eat chips.”

The man spoke the truth. I wish he were here to laugh with me at today’s adventure, but even more so because my arms ache so badly, I will never get this damn bag of chips open. 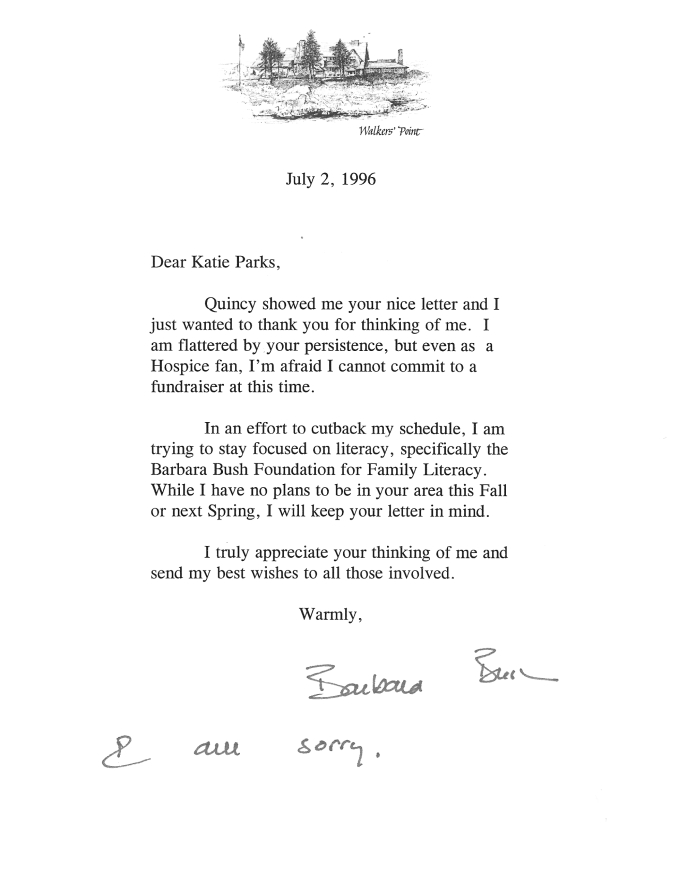 She reminded me of my Mom.

I considered my marriage as blessed as hers.

I’ve been inspired by her parenting, her philanthropy and her love of Springer Spaniels.

Selfless servant to our county as woman, wife and mother…

I wrote asking her to be the keynote speaker at Hospice’s annual fall event. The letter included pictures of Hogan, our Springer Spaniel puppy begging for her to say yes. I never expected such a personal reply.

Palliative care and hospice care are synonyms. Choosing comfort care, refocusing from hope for a cure to hope for quality, pain free days for the remainder of your life…that is the essence of hospice care.

I can only hope the same for everyone I love…and for myself one day.